Surrealism is a cultural movement that began in the 1920s, best known for the visual artworks and writings of the group members, who aimed to revolutionize human experience and to free people from restrictive structures. Lidl, on the other hand, is a German discount supermarket chain, best known for being cheap.

The French poet Comte de Lautréamont was seen as a prophet by the Surrealists, who often quoted as an example of Surrealist dislocation, his line from Poésies, where he describes a young boy as “beautiful as the chance meeting on a dissecting-table of a sewing-machine and an umbrella!” 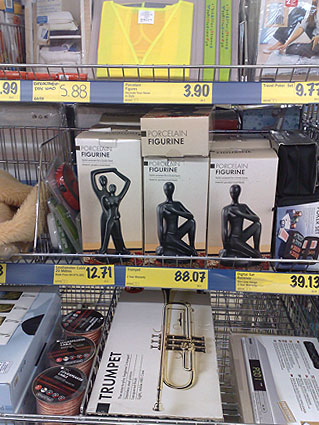 But is there anything as beautiful as the chance meeting in a Lidl of retractable dog leads, porcelain figurines, travel poker sets, loudspeaker cable, trumpets, and digital set receivers?!

* Thanks to the Surrealists and to Wikipedia. We have no association with Lidl.

This entry was posted in PHOTO. Bookmark the permalink.

One Response to A Lidl Surreal